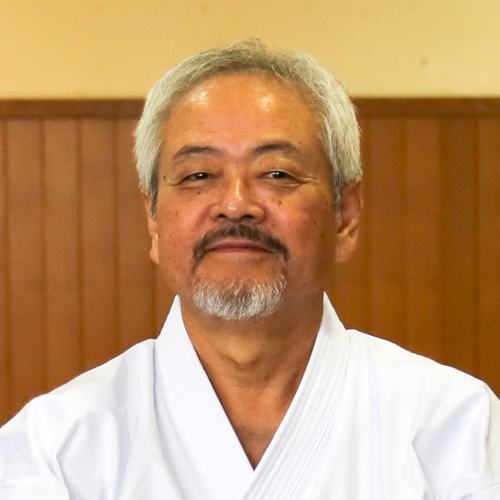 Shihan Toshihiro Oshiro, co-founder and Chief Instructor of the RBKD, has studied martial arts for well over 50 years, earning advanced degrees in karate, kobudo, as judo, and kendo.

Shihan Oshiro was born in Haneji, Okinawa and began training in karate as a young man. He had the opportunity to learn karate and kobujutsu directly from many masters of Okinawan martial arts, including Sensei Shoshin Nagamine, Sensei Chogi Kishaba, Sensei Masao Shima, and Sensei Seigi Nakamura.

In 1978, after serving as a police officer in Okinawa, Shihan Oshiro emigrated to the United States to teach Okinawan karate. Once in the US, he founded Oshiro Dojo in Northern California and later co-founded the Ryukyu Bujutsu Kenkyu Doyukai (RBKD). Thanks to Shihan Oshiro's tireless travel and teaching nationally and internationally, the RBKD today includes dozens of member dojos across the United States, Europe, and Japan. In 2018, Shihan Oshiro relocated back to Okinawa, where he continues to train and teach.

In addition to being appointed the chief instructor of the RBKD by Sensei Chogi Kishaba, Shihan Oshiro holds 9th dan in Shima-Ha Shorin-Ryu karate, and 8th dan in Yamanni Chinen Ryu kobujutsu. Shihan Oshiro is considered a top authority on Ryukyu martial arts and has been featured in Okinawan prefectural martial arts demonstrations and many research articles about Okinawan karate and kobudo.